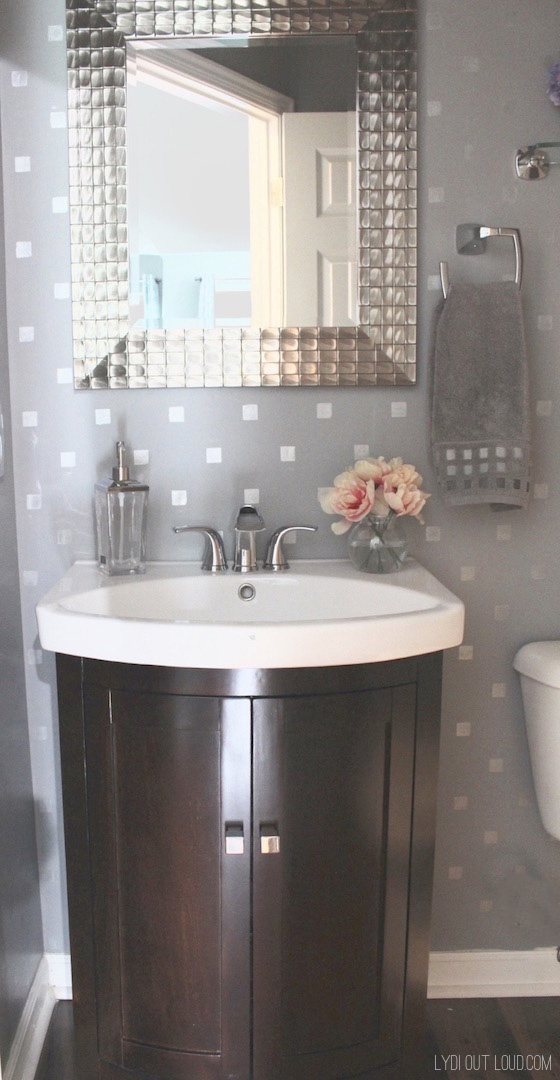 I know it’s been awhile since I’ve shared any progress on our house remodel and there’s a reason for that. Guys, it’s taking a loooong time. There’s progress everywhere, but not so much on the completion part. One such case has been the half bath; it has been almost done since we moved in. Well finally we can move this one into the done column!

This was the half bath before. Beige walls, a brass mirror (removed prior to taking this picture), cracked beige tile, white pedestal sink, and a brass towel rack. Btw, it should really be called a quarter bath. It’s as big as a minute. You can walk in and pivot, that’s all. Piv-ot, piv-ot! Any Friends fans? Also, this photo was taken by the previous owners… Ryan puts the seat down. 😉 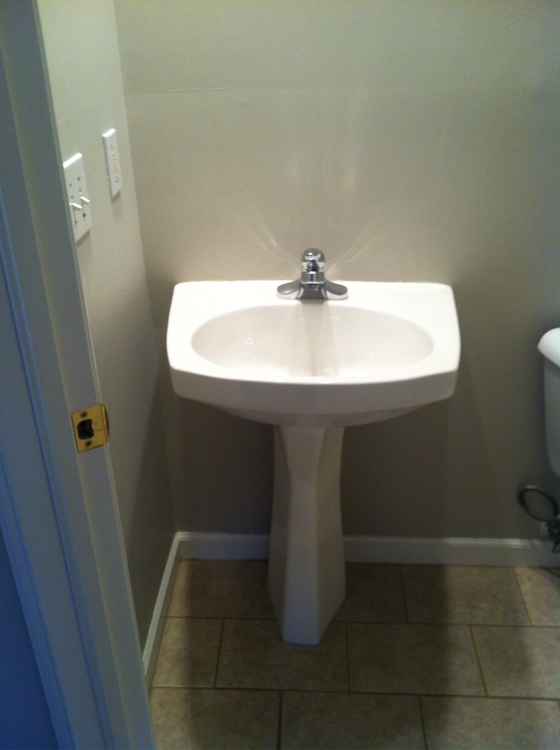 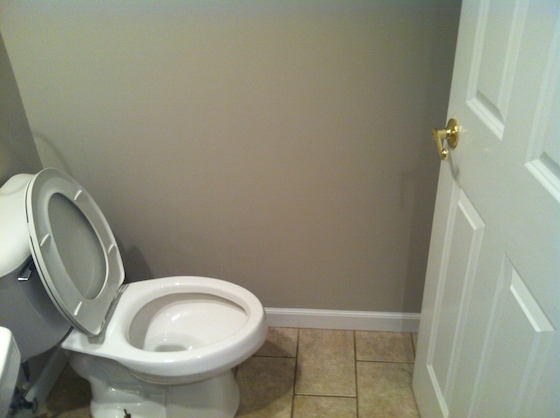 Painting the house and replacing all the floors were the 1st projects completed prior to us moving in (in that order… big mistake. HUGE). Let’s just say the fresh paint acted like a magnet to all of the lovely floor dust. Ew.

The first half bath specific project I decided to try was a wall stencil I had seen on Pinterest. This was the first time I had ever attempted to do a large scale stencil and had no idea how long it takes! ! It didn’t help my cause that my stencil was only 12″ x 12″. I’ve since started making my own stencils which are larger and that has sped up the process considerably.

I decided to start on the wall that is right behind the door, since it would be the least visible in case there were any mishaps. Shortly thereafter I decided to stencil only the main wall facing the door as an accent, so then I was in a pickle! I had already done a foot of the bottom of the wall behind the door; I didn’t want to stencil the whole thing but also didn’t want to have to paint the entire wall again to cover it. I decided I would leave it as is, and pretend that I meant to do it that way; like a bottom border. Although this was not the original plan, it was a true make it happen moment and I loved the outcome. 2 days later, I was finally done, and told myself that I would never do that again. Lies (foreshadowing to upcoming Kitchen remodel). 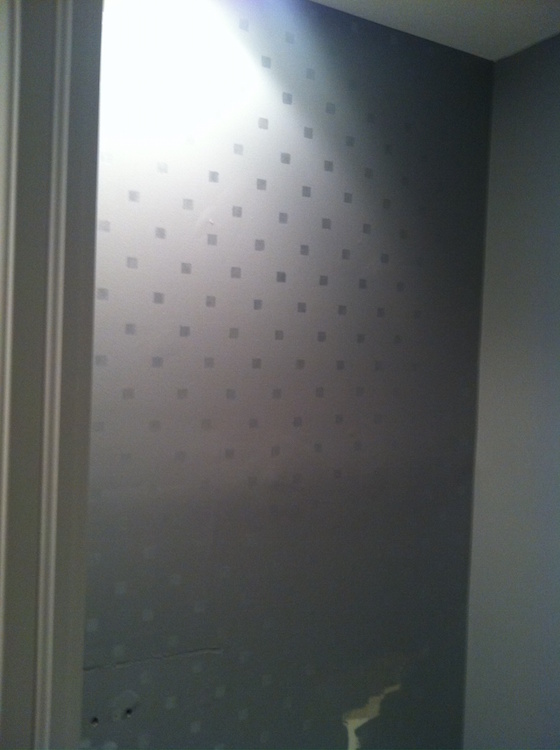 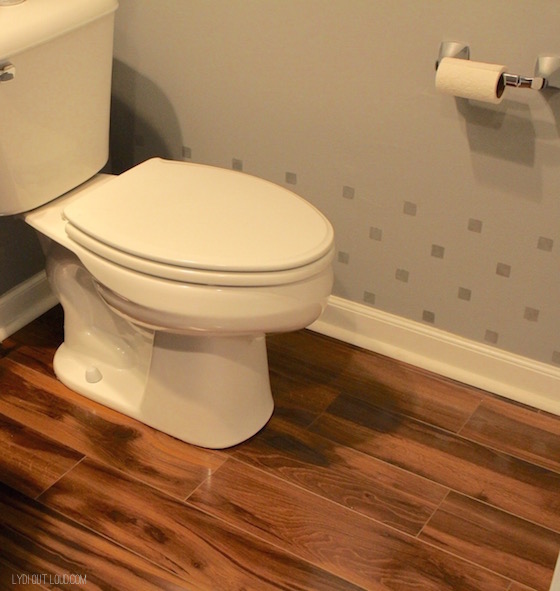 Next we needed to find a vanity and sink which presented as quite a challenge due to the tight situation in the half bath. We measured the wall and found a vanity that we fell in love with! We get it home and yes, it fit between the wall and the toilet. No, it didn’t lend itself to bathroom privacy, as the door wouldn’t close because the vanity stuck out to far. Ahhhhh we hadn’t measured the depth! 🙁 Chalk it up to another oops to add to the list of oopses we have encountered in our first home renovation (we’ll call them learnings). We found another vanity/sink combo option and it worked! 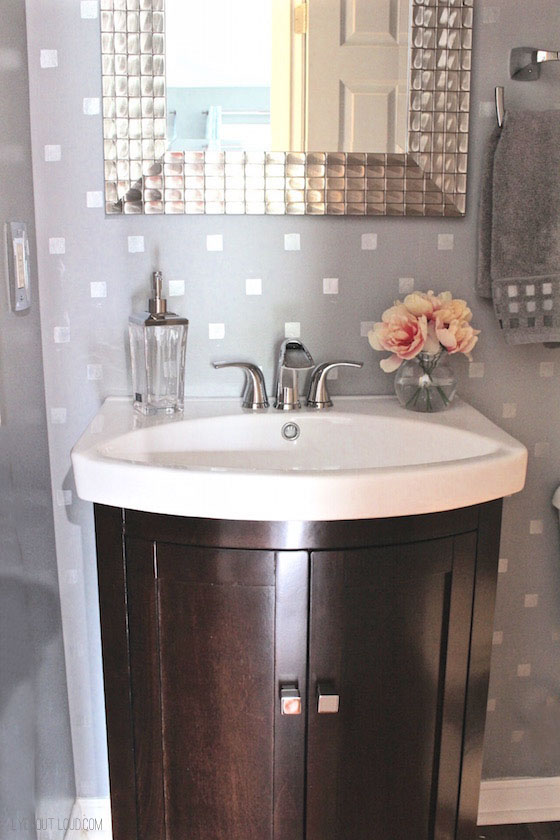 I really liked the metallic square theme we had going on from the stencil, so of course I got a little OCD with it. This metallic square quest was one of the reasons (let’s be real, the only reason) that it’s taken so long to finish this room. The first things I found to fit the theme were replacement square chrome knobs for the vanity and the sink faucet. 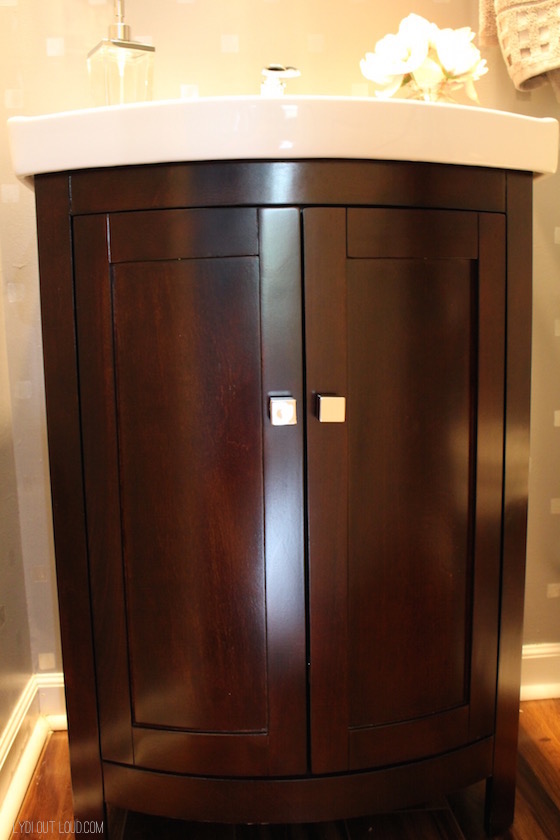 The next finds were chrome hand towel and toilet paper holders with a square detail. Then imagine my delight while strolling through Home Goods and stumbled upon this gray towel with metallic thread squares on it! I may have squealed a little when I saw it. I’ll never tell. Well, I guess I just kinda did. 😉 Oh Home Goods, you never let me down! 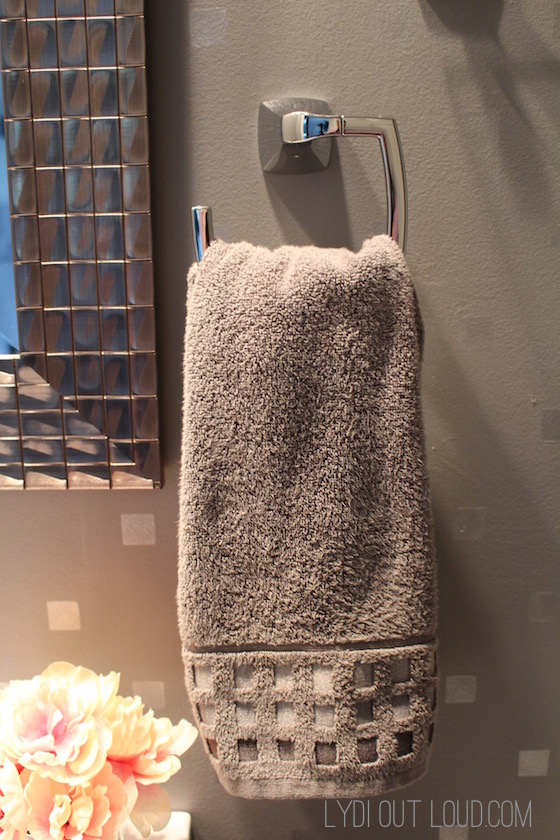 Next was replacing the white switch plate covers with chrome ones. 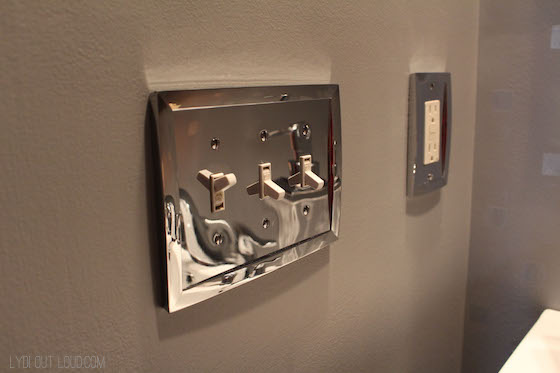 There was no mirror in the half bath for probably the first 4 months that we lived here, as I was determined to find a silver mirror with squares to tie it all together. My OCD was out.to.play! Eventually, the search was over. The hunt paid off. I found this mirror at Old Time Pottery (my mom and I just stopped in there one day to roam around for fun) and it was perfect (even though it’s technically rectangles, my OCD has to compromise sometimes). 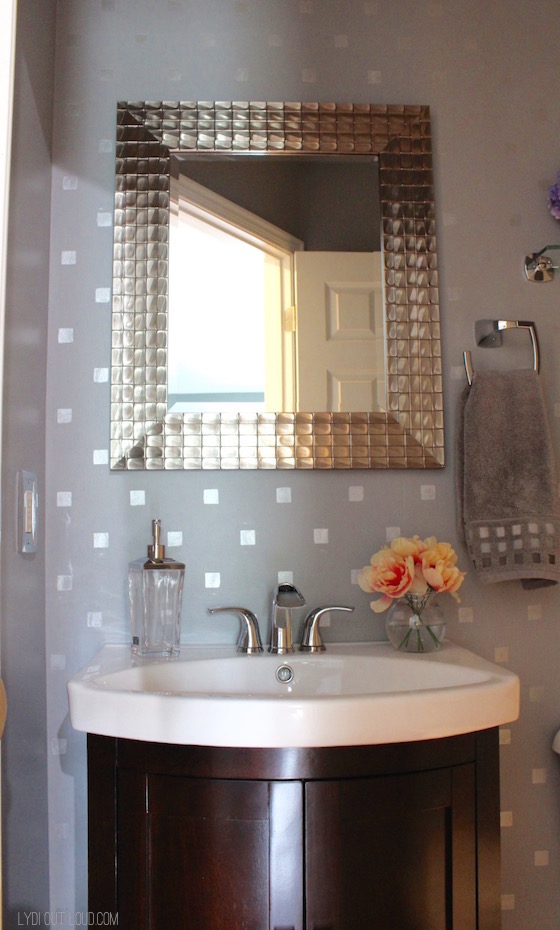 The final mission was the hunt for a glass shelf with some square chrome holders for above the toilet. I searched high and low so I had to let go of this one for a little bit. I finally found this one Amazon. 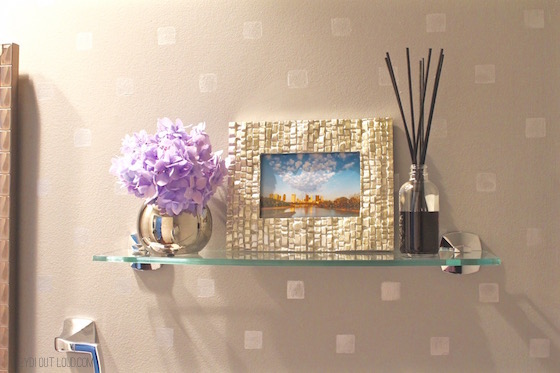 So here’s our finished half bath (I even found a square chrome hand soap dispenser!)

Whew this one was a challenge with such tight quarters, but I’m pleased with the outcome! What do you think?

Thanks for stopping in and have a great weekend! 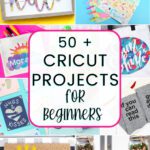 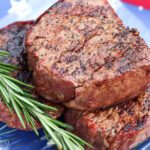 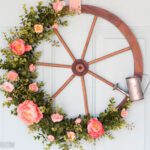